There are two ways how to settle your obligation and release TKP tokens pledged as collateral.

Release TKP collateral that was tied during EFT Round 4 bounty stakes depositing by using one of the following options:

Settlement BEFORE the distribution of EFT tokens to bounty participants.

You can settle your obligation at any time, before EFT tokens distribution to bounty hunters, by simply giving back the EFT Round 4 bounty stakes, which you had previously deposited.

How to do that?
1. Open Collaterelize Asset page
2. Find the line with the bounty stakes which you want to settle
3. Click on [settle] button as shown in the example below.

The result, the same amount of previously collateralized and deposited bounty stakes will be deducted from your Tokpie account balance. At the same time, the tied TKP tokens will be unlocked.

IMPORTANT: Before settlement, make sure that you have the same stakes in the same amount available on your Tokpie account balance. If you don’t have, then delete all opened orders here or buy these stakes in the related market.

Settlement AFTER the distribution of EFT tokens to bounty participants.

If you have not yet fulfilled your obligation as described in the 1st Option above, then Tokpie sends you an email notification containing the following information:

NOTE:
– Tokpie sends this email notification only after EFT tokens are distributed to all bounty hunters. After getting the notice, you will have 48 hours to transfer EFT tokens;
– After a successful transfer, you will get back TKP tokens previously tied as collateral and your obligation will be settled automatically;
– get EFT tokens for settlement by participating in Easy Feedback Round 4 bounty.

What if bounty campaign fails

If Easy Feedback doesn’t distribute EFT tokens to bounty hunters for any reasons (a failed project) then Tokpie returns TKP collateral to a user who has collateralized and deposited EFT Round 4 bounty stakes, due to the formula:

1. After signing up or logging Tokpie, open Collateralize Asset page, and select bounty stakes title that you want to deposit.

2. Enter the number of stakes you want to deposit.

You can deposit any quantity of bounty stakes starting from 0.1 stakes. it doesn’t matter whether you have earned bounty stakes or not yet!

Note: In the grey fields you can see how much TKP tokens are required for collateral and how much TKP you have available on your Tokpie account balance.
Important: if bounty fails Tokpie returns collateral to you!

After pressing on the green button, a new line appears in the Collateralized Assets table as shown in the figure below.

Congratulations! You have just deposited some bounty stakes on your Tokpie account balance and can trade them by clicking on the ‘hummer’ icon.

Also, learn how to get TKP, ETH, USDC by selling bounty stakes and how then to get your collateral back.

Know about the main conditions of Easy Feedback Round 4 (final) bounty.

Easy Feedback (EFT) tokens for Rounds 1-4 will be distributed after all IEO sessions, running on different exchanges, have come to the end.

Link to Bounty Thread on Bitcointalk

Stay always in touch with Tokpie to Earn, Trade and Invest as never before.

Know how to get Ethreum (ETH), USDC and TKP immediately and upfront by selling EFT Round 4 bounty stakes.

Everyone who holds EFT bounty stakes (Round 4) on his Tokpie account balance after JAN-04-2020 will receive EFT tokens at the end of 2020 due to the Conversion Rates stated below:

Here are the Round 4 EFT bounty stakes Conversion Rates:

Any participant of Easy Feedback Round 4 Bounty and any Tokpie user could get TKP, ETH, TKP by selling EFT bounty stakes in three simple steps.

You can deposit any amount of Easy Feedback Round 4 Bounty stakes even if you have not earned them, as explained here.

Sell the deposited bounty stakes for any price you want to get Ethereum (ETH), USDC and TKP as shown here. You may also buy EFT bounty stakes to get the EFT tokens after distribution.

Settle your obligation at any time or soon after EFT tokens distribution as described here.

Q: Shall I pay for trading bounty stakes?
A: Yes, small trade fees and withdrawal commissions are applied.

Q: May I see some feedbacks for how it works?
A: Sure, Tokpie exchange provides its services since September 2018. Read all feedbacks in the ANN thread dedicated to the Bounty Stakes Trading

Q: What is the Tokpie?
A: Tokpie is the first cryptocurrency exchange that provides a unique Bounty Stake Trading service to hunters, cryptocurrency traders & investors. 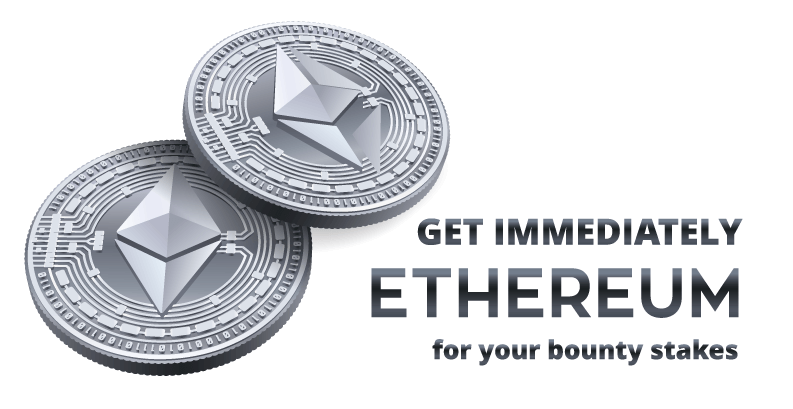 To earn and get ethereum (ETH) in seconds without any investments, perform simple tasks by using your following accounts: Reddit, Facebook, Twitter, Bitcointalk, Medium, Telegram, and LinkedIn.
In addition to the ETH that you can get immediately when a task is done, you receive valuable TerraGreen (TGN) coins.

UPDATE: The ability to trade TerraGreen bounty stakes (Round 2, 3, and 4) is prolongated until

Such decision was made because of too many hunters attracted. So, more time will be required to count all stakes properly and prepare a final spreadsheet for TerraGreen bounty (rounds 2, 3, and 4)

NOTE:
– By clicking on the links above you can submit your trade orders at any price you want, check market depth, view current bids, asks, last matched prices and price charts;
– You may sell and buy TGN stakes (round 4) only until May 14, 2019;
– All holders of TGN bounty stakes (round 4) will automatically get TGN coins on their Tokpie account balances within 60 days after May 30, 2019, in accordance with the conversion’s proportion revealed as the results of the Bounty Campaign ROUND 4;
– You can check bounty stakes prices without registration (6 sec loading time)
– The following trade fees are applied.

Q: May I see some feedbacks for how it works?
A: Sure, this is our 8th “Get Ethereum instantly” campaign. Check  ANN thread dedicated to the Bounty Stakes Trading and find even more feedbacks here. Join the discussion n Bitcointalk.

Q: How can you prove that it’s not a scam?
A: Check official bounty campaign and TOKPIE contracting with TerraGreen.

Q: What is the TOKPIE?
A: TOKPIE is the only one cryptocurrency exchange that provides bounty hunters and early investors with unique Bounty Stake Trading service

Q: I have questions. Where can I ask them?
A: You can post your questions here or ask them on TOKPIE telegram group.

1 stake per one post that you liked and shared from TerraGreen LinkedIn timeline.

Retweet on Twitter to get TerraGreen bounty stakes tradable for Ethereum on TOKPIE platform.

Clap on Medium to get TerraGreen bounty stakes, which are tradable for Ethereum on TOKPIE platform.

Make upvotes, comments, posts, and reposts on Reddit to get TerraGreen bounty stakes tradable for Ethereum on TOKPIE platform.

Want to grow with us? Stay in touch with TOKPIE.